Economic and Social Rights in Northern Ireland: Models of Enforceability

The Human Rights Consortium has today launched a report entitled Economic and Social Rights in Northern Ireland: Models of Enforceability. The report, commissioned by the Consortium and authored by a team of academics lead by the Human Rights Centre at Queens University Belfast seeks to explore a spectrum of models for enforcement of Economic and Social Rights (ESR) in Northern Ireland.

For over twenty years we have sought a way locally in Northern Ireland to articulate a set of rights protections that chime with the vision of a rights based society that was set out in 1998 in the Belfast/Good Friday Agreement. The Agreement said that we can best honour those who have died or been injured, and their families through ‘a fresh start, in which we firmly dedicate ourselves to the achievement of reconciliation, tolerance, and mutual trust, and to the protection and vindication of the human rights of all.’

One of the main instruments for the protection of rights envisaged under the agreement was to be a Bill of Rights. The Agreement imagined the delivery of a Bill of Rights via Westminster legislation and the Northern Ireland Human Rights Commission delivered its B/GFA mandated advice to the UK Government on the content of a Bill of Rights as far back as 2008, but the Government have refused to progress those recommendations.

The commitment to Westminster legislation has been further blocked over the last ten years by successive UK Governments who maintain the necessity of local political consensus on the content of a Bill of Rights. Though consensus and progress at a local political level on many rights issues, including the progression of a Bill of Rights, has been impossible to achieve to date. So despite the commitments within our peace process, the protection and vindication of the rights of all has made slow progress in Northern Ireland.

A key part of the inability to reach consensus politically on  a Bill of Rights has been disagreements about the inclusion of economic and social rights (ESR) or the way such rights might be enforced. We believe that the ongoing case for the inclusion of basic ESR protections within a Bill of Rights is clear given both our historic and present difficulties in protecting and advancing such rights as a society. The public have also clearly and consistently voiced their opinion that a Bill of Rights should contain protections for the social and economic issues that reach across communities and political divides. 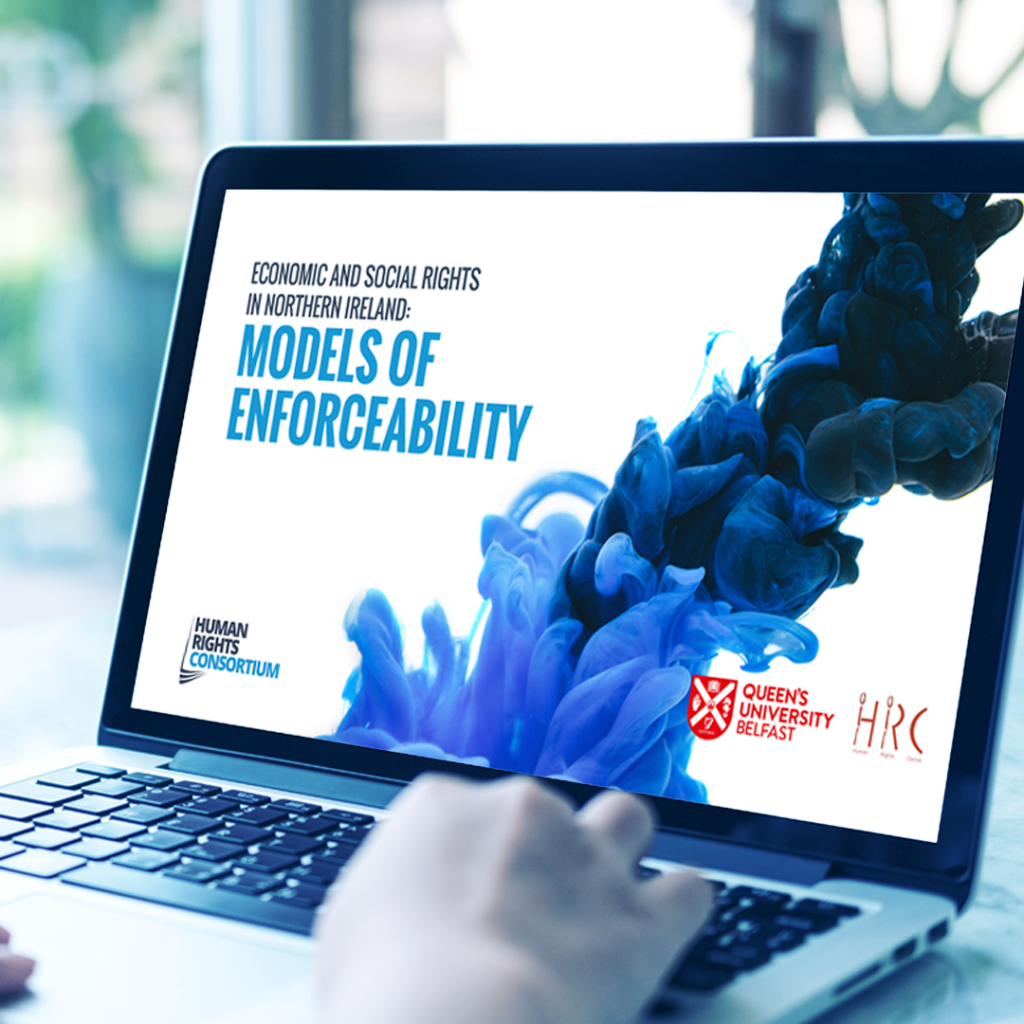 However, political opinion on this topic is clearly divided and major points of contention have focussed historically on those ESR, and particularly, the manner of their enforcement. With clear concerns by some politicians about the overlap and interplay between the role of elected representatives, the Northern Ireland Executive/Ministers, and the judiciary.

We believe that in order for rights to be properly upheld they require an effective legal remedy as a last resort if efforts at protection and implementation at a legislative or executive level have failed. There are also clearly distinct nuances to how ESR are enforced if based on international standards. These include duties to take appropriate measures, adopting the principles of progressive realisation and the concept of minimum core obligations.

It is clear that politically there remain concerns about this approach and the concept of enforceable ESR. Debates on the specific type of enforcement to employ in Northern Ireland had therefore stagnated for a long period, but the establishment of the Ad-Hoc committee offers an opportunity to revisit some of these conversations and see if agreement can be reached.

In order to positively contribute to this debate we have  commissioned a team of academics to explore through this new report a variety of enforcement opportunities that may exist for ESR. Their brief was to research and articulate other alternative models of enforcement of economic and social rights that existed between the spectrum from declaratory principles on one hand, to full enforceability on the other. We believe that the five models they have developed in this Consortium report represent a significant contribution to the debate on this important aspect of the Bill of Rights and we are grateful to the research team of Christopher McCrudden, Katie Boyle, Brice Dickson, Colin Harvey, Kathryn McNeilly and  Luke Moffett for their efforts and expertise in delivering this project.

While intentionally falling short of the concept of enforceable ESR provisions each model does offer significant elements for consideration as part of ongoing Bill of Right deliberations. The models, which look at the following areas – Pre-legislative scrutiny, piecemeal legislation, Fundamental Non-Justiciable duties, light touch judicial review and trade conditionality – all have elements that could be incorporated into a wider vision of how effective ESR might be achieved in Northern Ireland if combined with previous advice and contributions to this debate.

We hope that by developing this report we can contribute much needed food for thought into these discussions, help the exploration of how ESR can best be enforced in Northern Ireland and potentially assist in the development of consensus on this issue at all levels in Northern Ireland.

Northern Ireland needs the added security of strong social and economic rights protections within a Bill of Rights as much now as it ever has. To do so we need to develop a model of rights enforcement that fits within our governance framework, is workable by our elected representatives and represents a significant advancement in the protections on offer to the most vulnerable in our society. If we are to achieve this vision of a strong and inclusive Bill of Rights, Northern Ireland could potentially be a world leading destination as regards the protection of rights and a place to be proud of.  We hope that this report can make a useful and timely contribution to a fresh start on achieving that vision.

The full report and a shorter summary document are available for download below.