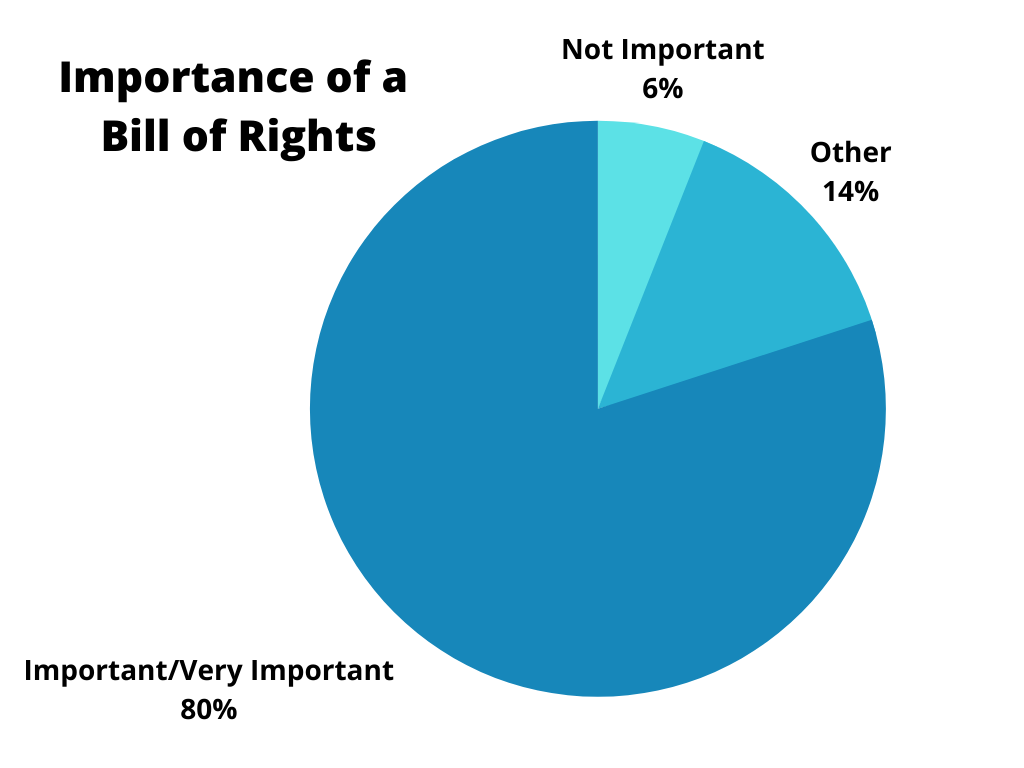 The survey found that more than half (61%) of respondents felt that not everyone in Northern Ireland today enjoys the same access to basic human rights, with discrimination and inequality within our society being cited as the primary reason that people felt that access to rights are not enjoyed equally (51%). Those who identified as women were 10% more likely than those who identified as men to believe that a Bill of Rights for Northern Ireland is “important or very important,” and 12% more likely to disagree that everyone enjoys the same access to basic human rights, with pregnancy and maternity, and caring responsibilities being two of the top five areas viewed as needing further rights protections (in place of religion and cultural background) for women, when results were broken down by gender. Those who identified as LGB were also 11% more likely to disagree that rights are enjoyed equally than those who identified as heterosexual, and disability was consistently highlighted as the number one area respondents felt more human rights protections were needed by almost all demographic breakdowns.

Specific references were made by multiple respondents to the impacts of mental health, poverty, immigration and asylum status on access to rights. Many also expressed opinions on reproductive justice, the denial of Irish language rights, unresolved victims/legacy issues and the impact of the pandemic on the rights enjoyed within our society today.

The values of human dignity, mutual respect and justice were consistently viewed as making appropriate foundations for rights in Northern Ireland going forward, and over 80% of respondents agreed that a Bill of Rights should include civil and political rights (88%); social, economic and cultural rights (82%); and the right to a healthy environment (86%). Other general rights themes that were mentioned included freedom of speech, freedom to campaign, the right to a fair trial, the right to privacy, the right to peaceful protest, and freedom of expression, and many of the respondents “expressed a desire for the right not to be labelled or identified as belonging to a particular social, political or cultural group”, instead expressing “a desire to get away from the orange/green and unionist/nationalist identities, and to simply strive towards greater equality and freedom from discrimination.” 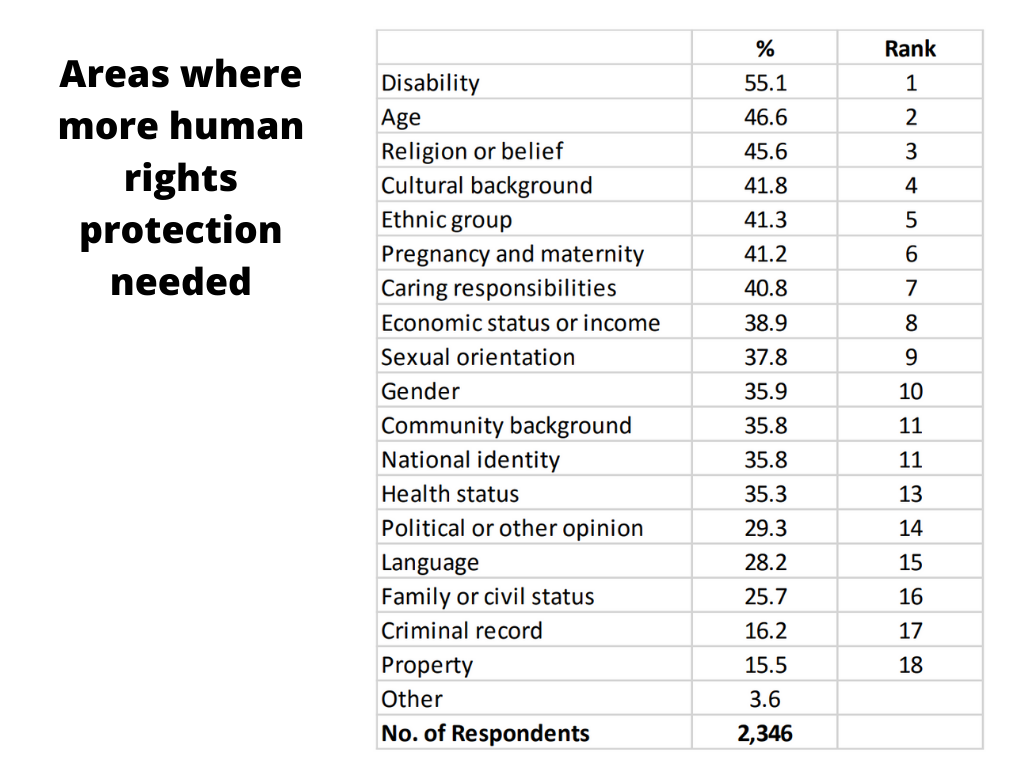 Since its creation the Northern Ireland Assembly and Executive have found it very difficult to reach consensus on many fundamental human rights and equality issues, and because of this many groups and issues have gone unprotected while Northern Ireland continues to fall behind the rights and equality standards being advanced in the rest of the United Kingdom. On International Human Rights Day, the 10th of December 2020, the Human Rights Consortium, alongside it’s 165 members, launched the #MakeOurFutureFair campaign which seeks the delivery of the long overdue Bill of Rights for Northern Ireland. The campaign is based on the strong belief of our members that Northern Ireland needs a strong and inclusive Bill of Rights as one of the essential tools to enable the government to properly protect us all. As part of this campaign, we held a series of workshops, engaging with over 200 members of the public on how they could get involved in responding to the Ad Hoc Committee’s Bill of Rights survey.

The survey findings strongly indicate overwhelming public support for the delivery of a Bill of Rights which would embed additional human rights protections locally. A Bill of Rights could provide an important framework for the progressive advancement and delivery of rights   locally and ultimately ensure that politicians and government are held to account should they fail to progress those protections. Given all the challenges that exist to the protection of fundamental rights at present, these survey results reinforce the urgent requirement to deliver a Bill of Rights for the people of Northern Ireland.

The Committee has been in operation for over a year and continues to receive evidence from various groups and individuals to inform their deliberations, including many members of the Make Our Future Fair campaign which you can be viewed here. They Committee are currently hosting a series of stakeholder events through March and April 2021 to capture more in-depth feedback from a range of specific sectors on the creation and content of a Bill of Rights for Northern Ireland.  More information, including a full timetable of those events is available here.

You can also find out more about our Make Our Future Fair campaign and how you can get involved here.

The full Research and Information Service Briefing Note on the NI Bill of Rights Survey is available here.